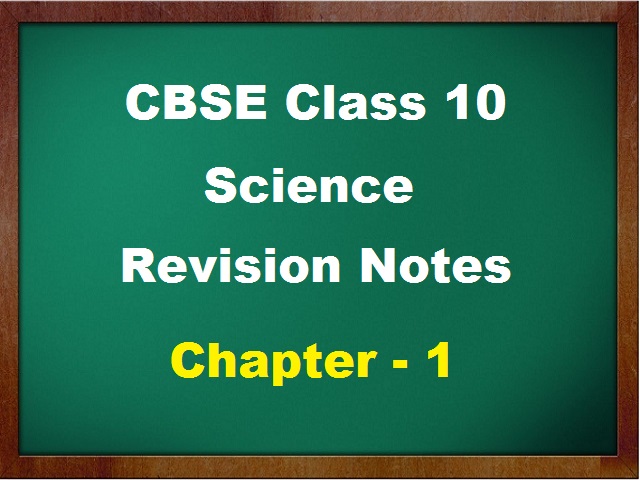 CBSE Class 10 Science paper under the upcoming Board Exam 2021 is scheduled to be conducted on 15th May (Saturday). We are presenting here the chapter notes for Class 10 Science Chapter 1 that will be helpful for quick revision before the paper. Students can also try the questions given at the end of the notes for self-assessment.

Chemical reactions: A chemical reaction is a process in which new substances (products) with different properties are formed as a result of the breaking of bonds in reactants.

Why it is necessary to balance a chemical equation?

What is a skeletal chemical equation?

(i) Combination: The reaction in which two or more reactants combine to form one product is called Combination Reactions.

(ii) Decomposition: The reaction in which one compound decomposes in two or more compounds or elements is known as Decomposition Reaction.

(v) Precipitation: The reaction in which an insoluble substance (precipitate) is formed by the mixing of two solutions containing salts is called the Precipitation Reaction.

(vi) Neutralization: The reaction in which an acid reacts with a base to form salt and water by an exchange of ions is called Neutralization Reaction.

When sodium hydroxide reacts with hydrochloric acid, action of both gets neutralised forming sodium chloride and water.

(vii) Oxidation: A reaction that includes gain of oxygen or removal of hydrogen (or loss of electrons).

Reduction: A reaction that includes removal of oxygen or addition of hydrogen (or gain of electrons).

Oxidising agent : A substance that oxidises another substance and itself gets reduced.

Reducing agent: A substance that reduces another substance and itself gets oxidised.

Corrosion: The gradual eating up of metals by the action of air and moisture on their surface  is called corrosion.

The most common example of corrosion is rusting of iron.

Steps to prevent rusting of iron:

(i) Coating the iron surface with oil , grease or paint
(ii) Depositing a layer of zinc on the surface of iron. This process is called galvanisation.
(iii) Forming alloys of iron

Rancidity: When fats and oils are exposed to air, they get oxidized and become rancid and their smell and colour change. This phenomenon is called rancidity

1. Why should a magnesium ribbon be cleaned before burning in air?

2. What happens when a piece of silver metal is added to copper sulphate solution?

3. Write a balanced chemical equation for the following:

(i) when 1 mL of dil. Hydrochloric acid is added to 1g of Sodium metal.

(ii) when a solution of potassium chloride is mixed with sodium chloride.

(iii) A piece of sodium metal is added to absolute ethanol to form sodium ethoxide and hydrogen gas.

Scroll back to top